Tonight at 11:06 PM, we responded to a single car accident with entrapment on the Westbound Southern State Parkway just east of Route 110. One patient was partially ejected from the vehicle while also pinned under the dashboard with multiple traumatic injuries. The crews from Heavy Rescue 1-5-3 & 1-5-4 went to work using chainsaws to cut through the thick bamboo just to access the vehicle, before extricating the patient using our various Hurst tools. After just over an hour, we were finally able to free the patient who remained conscious and alert throughout the extrication. The patient was then transferred to awaiting Ambulance 1-5-9 where Advanced Life Support was continued by our Volunteer ALS providers and First Responder 1-5-80 prior to being transferred to Suffolk County Police Department's awaiting medivac for transport to Stony Brook Medicine. Also on scene were Ambulance 1-5-8, Fire Police 1-5-18, and Assistant Chief 1-5-31. All units were under the command of Chief of Department Duane Welliver. While on the scene of this car accident, a 2nd car accident occurred right behind us, which was handled by Ambulance 1-5-29 and Support 1-5-22.

Thank you to the South Farmingdale Fire Department for providing mutual aid to the scene to secure a landing zone on the Southern State Parkway. 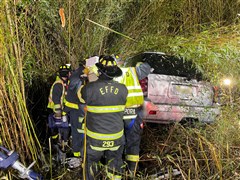 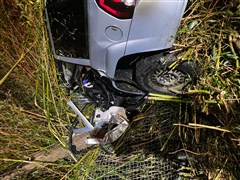 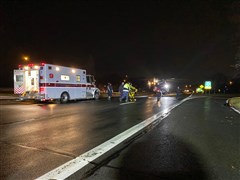